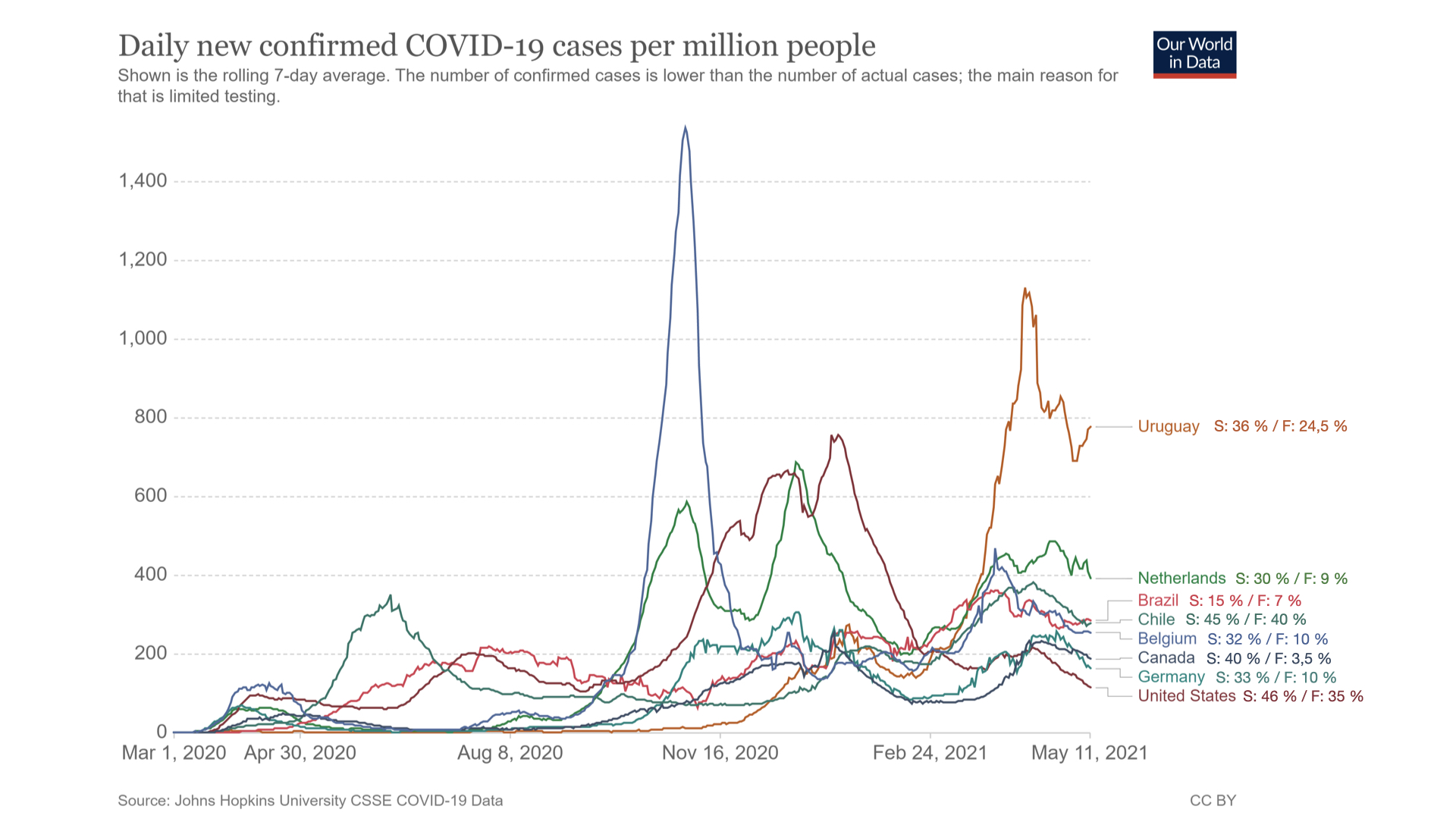 One cannot make sensible predictions on the further course of the pandemic without understanding the mechanisms that are driving transmission and adaptation of more infectious variants. These mechanisms, however, seem to remain largely unknown to the stakeholders of the ongoing mass vaccination campaigns. This is because major contributors to the population dynamics of the pandemic are either ignored or not understood, in particular

Mass vaccination campaigns have been rolled out on a background of high infectious pressure. This has resulted in elevated numbers of previously asymptomatically infected subjects who became susceptible to Covid-19 disease or exert suboptimal, S-directed immune pressure. As increasing vaccination rates will result in a gradually expanding reservoir of asymptomatic viral spreaders, the benefit of reduced disease and hence, viral shedding in vaccinated elderly (or otherwise vulnerable subjects) will be countered by enhanced spread and breeding of more infectious variants in less vulnerable, asymptomatic subjects. The higher the vaccination rate, the more the latter effect will outweigh the benefit of vaccine-mediated reduction of immune pressure exerted by the vulnerable part of the population.

When the infection dynamics will have reached a stage where the virus increasingly spreads among both, vaccinated and unvaccinated individuals without causing disease, Sars-CoV-2 will increasingly be challenged by the suboptimal immune conditions it encounters in these subjects.

Training on suboptimal S-directed immunity will enable more infectious variants to reproduce more efficiently. The higher the vaccination rate, the more vaccinees will serve as asymptomatic carriers and hence, the faster the S-directed immune pressure will shift to the RBD (1) of the virus, thereby resulting in more efficient reproduction of vaccine-resistant immune escape variants.

To the extent that mass vaccination of vulnerable subjects is combined with infection prevention measures, the drop in infection rate in these subjects will be more pronounced and hence, the subsequent rise in morbidity and mortality rate of previously asymptomatically infected subjects will become less obvious (see fig. 1a).

2. Mass vaccination campaigns in vulnerable subjects conducted on a background of high levels of disease in previously asymptomatically infected people (e.g., as a result of a high wave of disease in vulnerable people) have little effect on diminishing viral infectious pressure in the population. Stringent infection prevention measures, however, enable a dramatic drop in viral infectious pressure (as the latter primarily originates from symptomatically infected subjects): see fig. 2a.

To the extent that mass vaccination is combined with infection prevention measures, the rise in infection rate in (nonvaccinated or vaccinated), previously asymptomatically infected subjects will be less pronounced.

Under scenarios 1. and 2., implementation of stringent infection prevention measures is only going to delay dominant circulation of more infectious or vaccine-resistant variants (respectively by increasing the decline or decreasing the incline in viral infectious pressure). The faster the vaccination rates increase, the lower, however, the impact of flanking infection prevention measures.

Regardless of whether scenario 1. or 2. applies, mass vaccination campaigns in the heat of a pandemic of a highly mutable virus are predicted to lead to a large wave of morbidity and mortality in vaccinees. As this wave is likely to dramatically heighten infectious pressure on the non-vaccinated part of the population, innate immunity of the latter may be further eroded such as to substantially enhance susceptibility to Covid-19 disease of this group as well. At this stage, full- blown lockdowns may have to be imposed as a last resort.

It is reasonable to postulate that for any given population, the time of occurrence as well as the height and breadth of this wave will primarily depend on the rate and speed of the mass vaccination campaign and - to a lesser extent - the level of infection prevention.

Based upon the above reasoning, it goes without saying that especially enrolment of youngsters in mass vaccination programs will expedite propagation and dominance of more infectious variants, including such that are vaccine-resistant.

‍
Figs 1 (a, b) and 2 (a, b) show a number of examples of countries which started mass vaccination campaigns under scenario 1 and 2, respectively. Current single (S) and full (F) vaccination rates are shown next to the country name. In all cases, full vaccine resistance is expected to occur within the next few months, or even weeks. A number of smaller islands (e.g., Seychelles, Maldives, Bahrain) have managed high vaccine coverage rates within a relatively short period of time. Some of them had relaxed their infection prevention measures as their vaccine coverage rates were growing (e.g., Seychelles). This already explains why these islands have now begun to face a substantial wave of morbidity and mortality (more infectious variants), even in subjects who’ve been fully vaccinated (see fig. 3a, 3b).

Covid-19 vaccination campaigns that are rolled out in the heat of a pandemic will inevitably breed variants that are more infectious and ultimately become resistant to vaccines. The smaller the population and the faster mass vaccination campaigns are rolled out, the faster infection, morbidity and mortality rates will rise. Based on how the pandemic is currently evolving in a number of smaller countries/ islands (e.g., Seychelles, Maldives, Bahrain), it is reasonable to assume that over the next coming months, or weeks, several other countries are going to show a dramatic increase in these rates as well.