Q&A #21 : Does the C-19 vaccine prejudice the innate antibody response of children to different degrees based on the similarities of the various glycosolated pathogens they will later encounter? 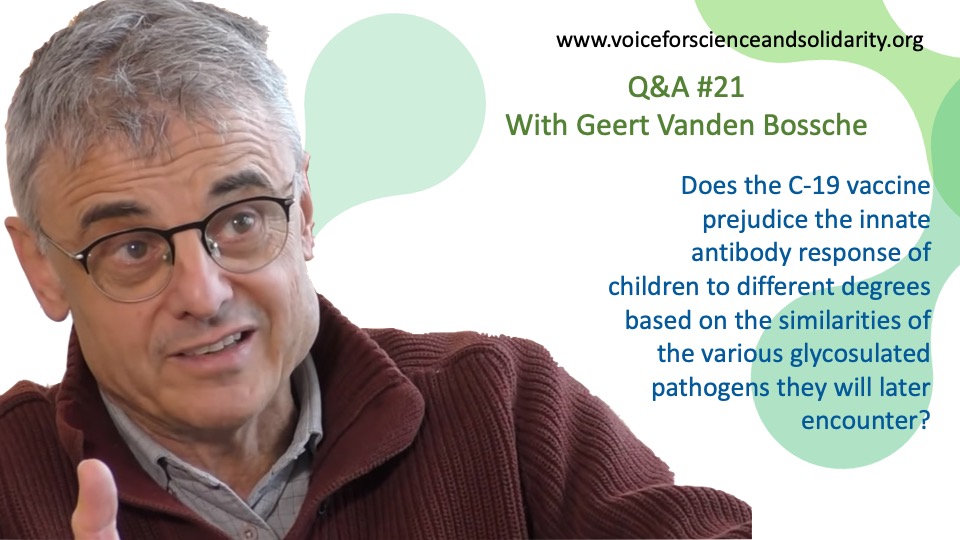 For those children who, unfortunately, have gotten a Covid-19 vaccine, does this one hijacking (the shot(s) and subsequent infections that are not neutralized) of their immune response prejudice their innate antibody response to different degrees based on the similarities of the various glycosolated pathogens they will later encounter?

The problem comes from the infection-enhancing antibodies (IEAbs). As viral infection rates are only climbing, and as these Abs render vaccinees highly susceptible to infection, more and more vaccinees are now sitting on high titers of these Abs. Children who have gotten a Covid-19 vaccine will, of course, not be an exception. Because the IEAbs will continuously outcompete the innate Abs, the latter will not manage to educate the cell-based innate immune system (NK cells) on how to recognize a SC-2 infected host cell at an early stage of infection at a time where innate Abs are no longer functional or already overridden by foreign-centered immune cells. The latter can now happen very rapidly due to ADEI, which basically drives the virus into the adaptive immune system and promotes stimulation of foreign-centered T and B cells. This also applies to host cells infected by other glycosylated viruses that generate acute self-limiting infection/ disease because the patterns these viruses express on the surface of infected host cells are shared.

So the answer is yes, these children are at high risk of suffering from irreversible deficiency of their innate immune system to recognize ‘foreign’ from ‘self’. When you prevent innate immune effector cells from learning  how to recognize self-mimicking patterns expressed on host cells infected by glycosylated viruses for a long enough period, these NK cells will never be able to recognize such viruses,  nor will they be able to recognize ‘altered self’ patterns expressed on pathologically altered host cells. Unfortunately, the latter inability opens the door to immune pathology and cancer.