Q&A #25 : Children's hospitals in the USA are experiencing a major surge of Respiratory Syncytial Virus (RSV). Parents are worried. Why is this happening and should we be concerned? 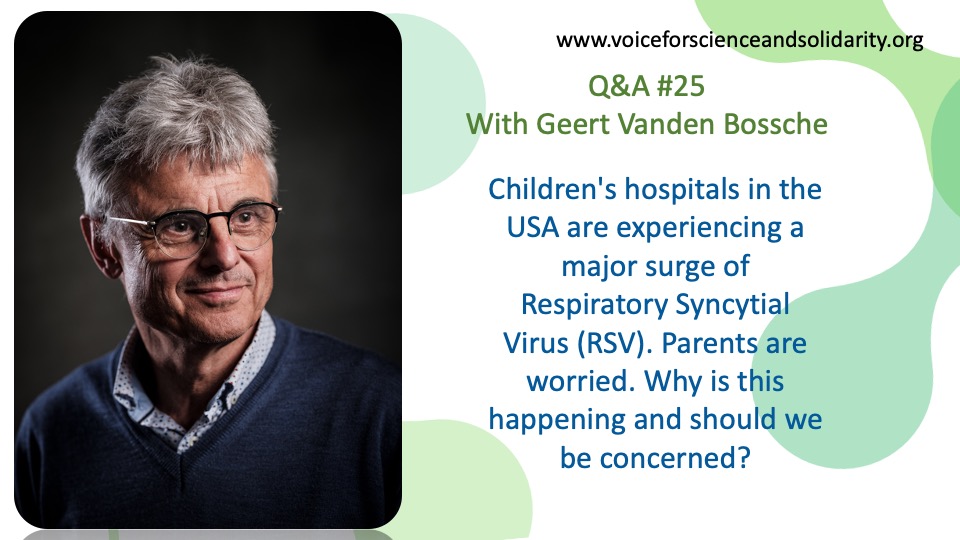 Children's hospitals in the USA are experiencing a major surge of Respiratory Syncytial Virus (RSV). Parents are worried. It seems that the infectious disease specialists and other "experts" have little or no understanding as to why this is occurring. Why is this happening and should we be concerned?

Although I do acknowledge the current surge in RSV cases, I don’t think it’s a critical priority. I’ve written several contributions on other epidemics/pandemics (including RSV) that I predicted to occur as a result of mass C-19 vaccination.

In my opinion, the reason for the surge is that vaccinees now serve as an asymptomatic reservoir for RSV and other viral infections.

Of course,  the part of the population that has weakened or untrained innate immunity and is not vaccinated will suffer most from the higher infectious pressure caused by the C-19 vax’ed segments of the population (i.e., young children and elderly people). Furthermore, young children may start out developing asymptomatic infection due to their innate immune protection. However, re-exposure at a time where they’re still sitting on nonneutralizing polyreactive IgM (as a result of previous asymptomatic infection) may increase their susceptibility to RSV infection (due to IgM Ab-mediated enhancement of viral infectiousness) and is therefore likely to cause more serious disease symptoms. The likelihood of re-exposure to RSV shortly after the first asymptomatic infection increases with higher RSV infection rate and the latter increases with higher rates of asymptomatic RSV transmission which, in turn, is high in highly C-19 vaccinated populations.

So, both enhanced asymptomatic transmission and enhanced susceptibility to RSV subsequent to previous asymptomatic infection are linked to mass vaccination.

However, as more and more children get infected with RSV, their innate immunity will get better and better trained and we’ll probably soon see a steep decline in cases (just like we previously witnessed with SC-2-mediated cases of MISC!). The more the kids get their innate immunity trained (due to SC-2, influenza or live attenuated childhood vaccines!), the lower the incidence of RSV will become.

Of course, one could try to make people aware that all of this is due to the mass vaccination campaign and that we need to stop this. However, what’s much more worrisome to me is that even if we stop mass vax, SC-2 is now self-catalyzing the evolutionary dynamics of the virus towards highly infectious variants (that IMO will ultimately become highly virulent) because of all the breakthrough infections. I will have more to say about that in an upcoming article.