The chicken-and-egg problem (which came first?) 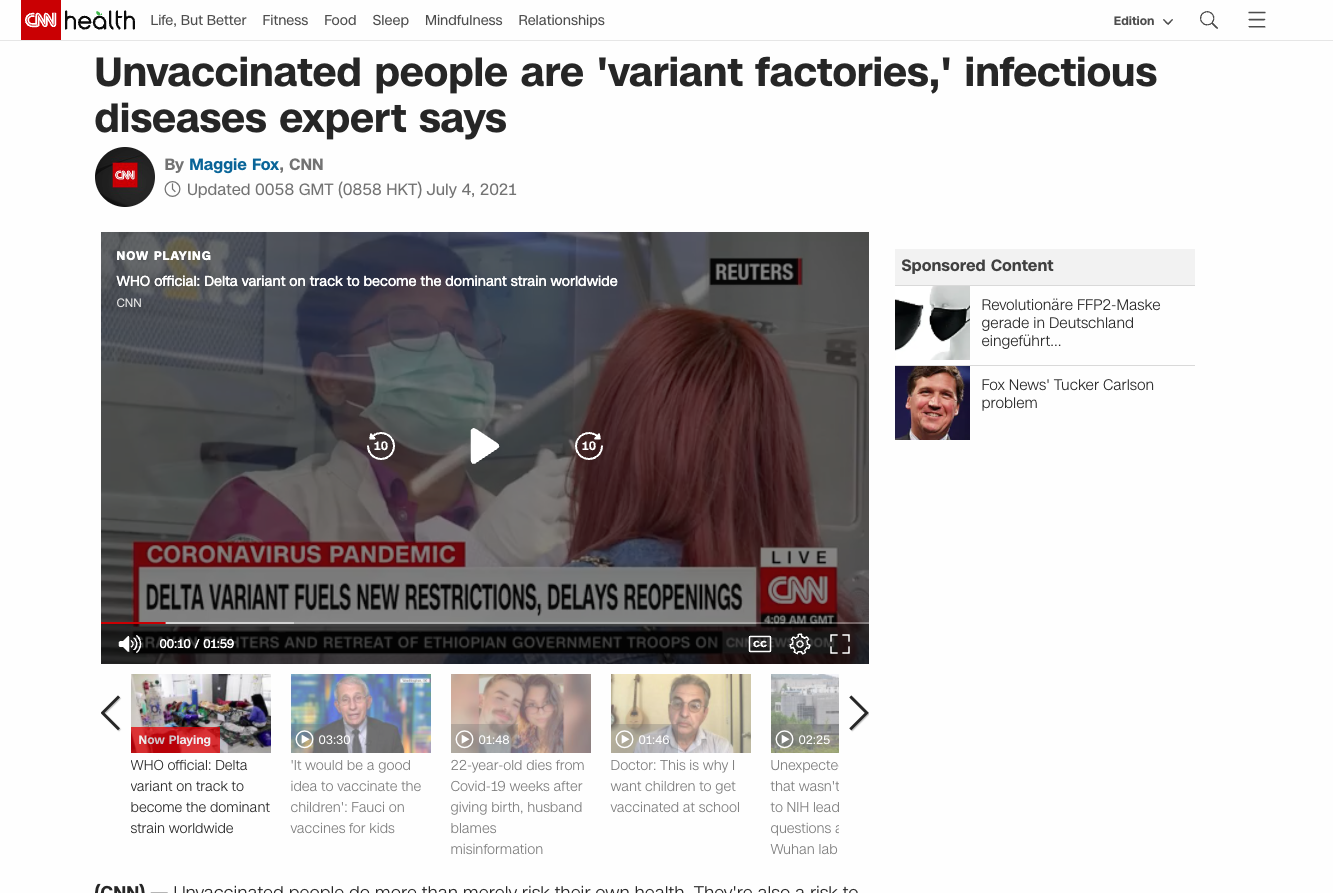 I am reading a report (i.e., https://edition.cnn.com/2021/07/03/health/unvaccinated-variant-factories/index.html) citing some comments of smart and knowledgeable professors and I am just thinking ‘OMG, how can one make statements that blunt and be a professor?’ Clearly, these guys have little understanding of the evolutionary dynamics of this virus as revealed by the current pandemic; they seem to ignore the huge impact of immune selection pressure on convergent evolution of mutations and selective adaptation of the virus to the massively rising antibody titers against spike (S) protein. If they would understand the dynamics and landscape of the evolving mutations as clearly outlined by molecular epidemiologists, they would have no choice but to conclude that the observed shift in natural selection forces is driven by mass vaccination.

I would strongly advise these professors to read my critical opinion article on ‘Why is the ongoing mass vaccination experiment driving a rapid evolutionary response of SARS-CoV-2?’, which I recently posted and which should remain available for consultation on my website. As can be concluded from my comments following below, the statements made by these professors are not backed by any scientific rationale and contradict the most recent observations from phylogenetics-based natural selection analysis. It’s unfortunate that laymen can no longer rely on big names and titles but ought to question the credibility of professors and experts who don’t provide sound scientific evidence for the cheap one-liners they are spreading. Is this because some of them have now become more of bureaucrats than real experts or because they’re having serious conflicts of interests or both? I don’t know. Anyway, people now need to exert greater scrutiny over the messages the established scientific elite is trying to convey – with massive help of MSM - to the broader public. Of course, this also applies to the analysis shared by scientists like me and others who disagree with the mantras and dogmas the public is currently bombarded with. That’s why we need a transparent scientific debate, open to the public, where different opinions can be articulated, discussed and challenged. As long as the stakeholders of these campaigns, and especially the advising experts supporting those, refuse to engage in such a debate, their interpretations and simplistic one-liners should be treated with extreme caution. Their statements become even more suspicious as they don’t seem to feel the need to systematically test both healthy vaccinees and non-vaccinated individuals for shedding of variants and to characterize the virus shed (as this would unambiguously inform about the type of host environment that promotes natural selection of evolving variants!).

As already mentioned on multiple occasions, molecular epidemiologist have shown that population-level S protein-directed immune pressure is now driving the propagation of variants that are increasingly evolving mutations enabling resistance to S-specific antibodies (as now massively induced by the ongoing vaccination campaigns). As more infectious variants bind to the cellular Ace-2 receptor with enhanced binding strength, the Ace-2 receptor more readily outcompetes S-specific antibodies for binding to these variants. Consequently, these variants gain a competitive advantage when replicating in individuals who exert strong S-directed immune pressure on the virus (i.e., in vaccinees!), especially upon incorporating additional mutations (within the RBD) that prevent direct binding of S-specific vaccinal antibodies. Variants that are increasingly resistant to S-specific antibodies (e.g., delta and delta plus variant) can only adapt to the population provided the S-directed immune pressure is widespread in the population. This is, of course, the case if larger parts of the population get vaccinated and when vaccinees can easily transmit the variant due to relaxation of infection prevention measures. In principle, non-vaccinated individuals who are in good physical and mental health can deal with all variants, provided the infectious viral pressure does not exceed a certain threshold. This is because their innate antibodies have relatively lower affinity for the virus. However, breeding of more infectious and more anti-S antibody-resistant variants in vaccinees will inevitably enhance viral replication and transmissibility in vaccinees, thereby raising the infectious pressure and increasing the likelihood for non-vaccinated subjects to become re-infected while their natural/ innate antibodies (Abs) are being suppressed by short-lived S-specific Abs (elicited as a result from previous asymptomatic infection). So, ‘yes’, some non-vaccinated people will become susceptible to the disease and then contribute to further propagation of these variants. It’s important to note, however, that this is a result and not the source of the enhanced evolution of the virus. So, not the non-vaccinated individuals but the vaccinees are now responsible for driving Sars-CoV-2 evolutionary dynamics. It’s also important to note that non-vaccinated people will not contribute to natural selection as they will either eliminate the virus (thanks to their innate antibodies in synergy with natural killer cells) or become susceptible to Covid-19 disease due to suppression of their innate immune defense. Short-term shedding of low concentrations of viral variants by asymptomatically infected, non-vaccinated people is a direct consequence of shifting natural immune selection forces that are increasingly coming into play as a result of mass vaccination. This will ultimately put the vaccinees in much worse shape than the non-vaccinated as the latter will still be able to rely on their innate Abs.

So, non-vaccinated people are not to be considered factories of variants as there is no evidence whatsoever that they transmit more virus or shed for a longer time than asymptomatically infected vaccinees. As explained in the above-mentioned article, non-vaccinated people are not responsible for selecting immune escape variants and enabling adaptation of increasingly anti-S Ab-resistant variants. Vaccinees, however, are to be seen as the breeding ground and ‘pilot plants’ for these variants.

Let’s now comment on a few of these blunt statements:

“Unvaccinated people do more than merely risk their own health. They're also a risk to everyone if they become infected with coronavirus, infectious disease specialists say”

Comment: Not true. Unvaccinated people have the more reliable protection as they can deal with all Sars-CoV-2 variants. Their protection is merely threatened by the enhanced circulation of more infectious variants, the adaptation and spread of which is promoted by those who exert strong (but suboptimal!) immune selection pressure, i.e., vaccinees. To the extent that non-vaccinated people further adhere to infection prevention measures and -not at least - avoid close contact with vaccinees, the likelihood for them to become seriously ill remains reasonably low (but clearly higher as during the first 10 months of the pandemic where no variants were circulating). This particularly applies to children and youngsters in good health. As viral transmission by asymptomatically infected, non-vaccinated individuals is low and short-lived, they do not constitute a ‘factory’ of variants that poses a substantial risk to others.

“That's because the only source of new coronavirus variants is the body of an infected person.”

Comment: Vaccinees get infected all the time. They cannot contain the variants as shown in a multitude of publications and breakthrough reports. They are not only a source of asymptomatic transmission but even a breeding ground for steadily evolving immune escape variants.

"The more unvaccinated people there are, the more opportunities for the virus to multiply," Schaffner said. "When it does, it mutates, and it could throw off a variant mutation that is even more serious down the road."

Comment: This is the ludicrous mantra of the WHO (see my previously mentioned article). What makes immune escape variants problematic is when they get selected and can subsequently adapt to the population. S-directed immune escape variants are preferably selected in vaccinees and the higher the vaccination coverage rate, the more rapidly and easily they will adapt to the population and become dominant.

Conclusion: The statements of these professors are not based on sound scientific grounds and ignore the basic principles of natural selection forces that are driving viral evolutionary dynamics. Instead, they’re based on simplistic mantras that can easily be conveyed to the broader public but do not match at all the molecular analysis of naturally selected mutations that are currently seen by genomic epidemiologists to be evolving under rising population-level immunity towards antibodies directed at S protein. The latter happens to be the target of the vaccines….So, don’t they think mass vaccination may help a bit to raise this selective immune pressure?

Again, we call for solidarity and not discrimination. All people deserve a treatment that can ultimately protect them from severe disease and long Covid. We do not want to end up with a society where some professors or, for that matter, any government agency, are holding people responsible for decisions they have to make based on their best understanding of never-ending contradictory messages. At this stage, science and common sense dictate that people should be treated at an early stage of clinical signs and symptoms. An ‘infection and treatment’ approach is not only very safe but it likely enables naturally protective immune mechanisms in both vaccinated and non-vaccinated people (even if they did not contract the disease in the past!). It may not prevent subsequent infection and mild disease but it should clearly protect against severe disease by virtue of priming of CoV-specific cytotoxic T cells (just as much as immunity acquired upon recovery from natural disease does). If treatment is only initiated when early signs and symptoms manifest, children and youngsters in good health will still be given the opportunity to eliminate the virus naturally at an early stage of infection by virtue of their innate antibodies.